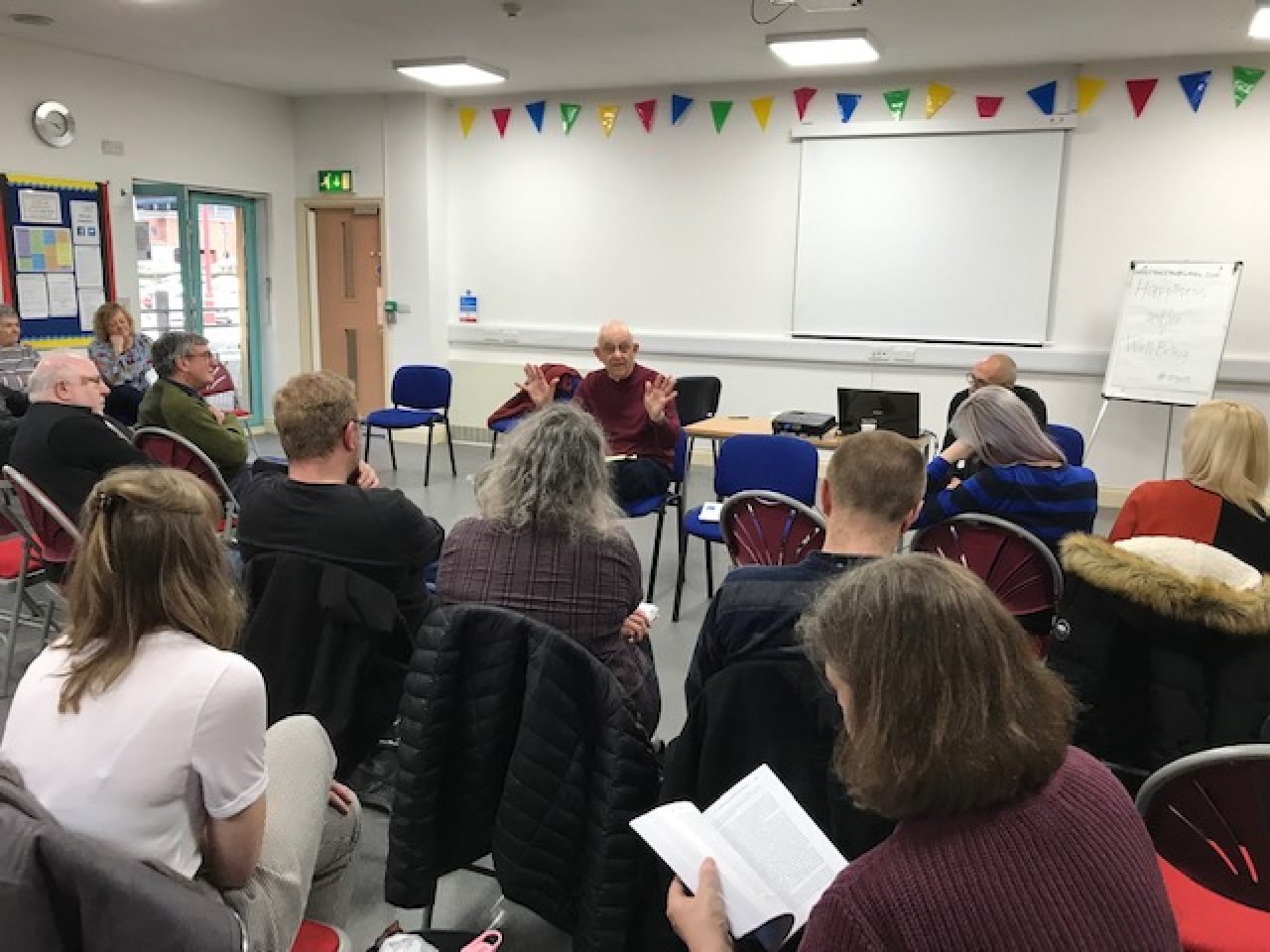 At the end of last month the National Youth Agency published Out of Sight [1], a report on the impact of the Covid-19 pandemic on vulnerable young people. Endorsed by the Children’s Commissioner for England and drawing on statistical and other evidence from a wide range of sources, it also sets out to make the case in the present crisis for youth work to be classified as an ‘essential service’ and for youth workers to be seen as ‘key workers’.

Who are ‘the vulnerable’?

The report suggests three groups of 8–19 year olds who are particularly in need of safeguarding and support:

In addition to the continuing impact of gangs and county lines and of ‘well-documented’ mental health pressures, the report highlights the young people – many ‘lacking a “safe” space’ – for whom there will be other ‘urgent’ concerns as the lockdown ends. These include the approximately 700,000 already ‘missing from education’; the million at risk of domestic abuse; the approximately 1 million with little or no digital access at home; and the nearly half a million who are homeless or living in a ‘precarious’ housing situation.

The report draws these findings together in two tables, one estimating numbers for twelve of the main ‘vulnerabilities’, the other the ‘needed youth work practice response’ to these and other conditions. It also makes the point that it is this generation which will experience the economic and social costs of this crisis most directly – financially, with reduced employment opportunities and with a consequential increase in those mental health problems. It thus urges that young people are included in evidence-gathering on the COVID-19 challenges and that, to ensure they are treated fairly and equally, they ‘have their voices heard and included in decision-making’ and other responses – adding that ‘without youth clubs and youth workers, far too many young people go unseen and unheard’.

Youth work as a key response

Youth work as open to being shaped by young people’s expectations and needs is recognised at a number of points in the report. Youth services are for example described as ‘a vital life-line to vulnerable young people, joining in activities without stigma but able to access support, talk to a trusted adult or disclose a problem for help’. The practice itself is explicitly defined as having roles which include engaging with young people ‘in non-formal education, out-of school activities’ and providing them with ‘somewhere to go, something to do and someone to talk to…’ – though, precisely because the youth worker will not know in advance what those young people may bring to the encounter, it cannot be assumed, as the paper seems to do, that they will ‘know what is needed’. Detached and outreach youth work gets specific recognition – identified as able ‘to engage young people in the community’.

Acknowledging that a clear exit strategy from lockdown is going to be needed for young people beyond just re-opening schools, the report also proposes that local authorities, children’s services and academy trusts are encouraged to ‘engage, deploy and up-skill youth workers in support of young people’. Particularly when ‘young people are not at school and (where) a non-formal setting is more appropriate’, it argues that consideration be given, too, to ‘the partial opening of youth projects for outreach and drop-in or small group sessions in line with social distancing measures’. With ‘many youth clubs and services (already) … rapidly adapting their work to go digital, employers and local authorities are also urged to provide the tools which (subject to risk assessments) enable youth workers to engage young people on line, including offering training for meeting vulnerabilities such as trauma and bereavement resulting from the pandemic.

In looking to the future, the report starts from the reality that youth centres and projects are currently closed, that many youth workers have been redeployed out of youth work or furloughed and that ‘trusted adult volunteers normally supportive of youth work are … self-isolating or volunteering for wider community services …’ It also warns that ‘nationally one in five youth clubs will not re-open, more in some regions’, and that ‘a threat (is) hanging over non-statutory youth services should austerity measures return post-pandemic’. The challenges for young people are especially likely to increase through the summer with schools closed and few community activities and other events available.

A cross-departmental response from Government – some critical questions

Feedback on the report from one project very quickly confirmed its value as a source of evidence to support its bid for emergency Covid funding. However, given that one of its recommendations is the need for ‘a cross-departmental response from Government…’ – and given the pre-crisis and even post-crisis track record of many of the ministers in that Government, starting with the Prime Minister – its wider use raises some more critical questions. This is particularly true as the longer-term struggle continues to reinstate those leisure-based, open access forms of youth work in England and also more widely in the UK which the report often seeks to promote.

One of those questions focuses on the very term ‘vulnerable’ and how, in taken-for-granted ways which can be dismissive of people’s personal agency, its causes can too easily be assumed to lie within the individual – that its roots are most likely to be found in her or his personal limitations (failures). As George Lamb, a disability rights activist pointed out forcibly in the ‘supplementary’ issue of Concept whose appearance co-incided with that of the NYA report, we need for a start to be careful how we work with the term in our face-to-face practice. As someone who is disabled himself, he thus reminds us that ‘many people classed as “vulnerable” do not necessarily see themselves that way’ and so, ‘like everybody else, will need to keep feeling that they have their own independence’[2].

Complex and challenging evidence is already accumulating anyway on who is most likely to end up attracting the ‘vulnerable’ label – and that that has to do with much more than them as individuals. From very early in the crisis, for example, worrying statistics began to emerge on how much more likely you are to die – by 27 per cent – if you are from a BAME community. Also, according to the National Office for Statistics ‘those living in the poorest parts of England and Wales are dying at twice the rate of those in the richest areas … 55.1 deaths per 100,000 people in the most deprived places compared with 25.3 in the least deprived’. Here, too, there is an interlinking of poverty with the prevalence of those ‘pre-existing conditions’ such as diabetes which put individuals most at risk of getting the virus. In an area hit hardest by post-2010 austerity policies such as Middlesbrough men’s life expectancy was already much shorter than that of men in Westminster – just 75.3 compared with nearly 84 [3].

It is in the context of these wider structural factors and their on-going impacts that another caution is needed: the risk that the outreach and generosity prompted by the crisis – such as an initiative like that of a 100-year-old ex-army officers which in two weeks can raise £30 million for the NHS – will allow a government still deeply committed to neo-liberal priorities to argue that philanthropy is a main and even perhaps the best route for funding health and other (including youth) services. Inspiring though such expressions of individual and collective concern and action are, many ultimately rest on judgements by the wealthy and powerful about who is deserving – or therefore, by implication at least, who is not. Strategically therefore these can never be a substitute for provision as a citizen’s right funded out of a taxation system which ensures that, like others, the wealthy and powerful pay up in full.

As Mae Shaw expressed it in her Editorial in the supplementary issue of Concept referenced above:

In the midst of such sincere outpouring of public goodwill, it can seem churlish to remind people that the British National Health Service is a tax-funded public service, not a charity – and certainly not a business. There will undoubtedly be attempts in due course to depoliticise this crisis, to reinforce rather than challenge the current ideological orthodoxy.

Alternatively she points to:

…attempts to seize the crisis as an urgent educational opportunity; as a warning of even worse things to come unless that ideological orthodoxy is seriously challenged [4].

A final caution on making ‘vulnerable young people’ the primary rationale comes very specifically out of a youth work perspective. Precisely because it is a ‘universal’ offer, it is likely that some – perhaps in some places many – of the young people youth work will attract will have been categorised as ‘vulnerable’. That however is very different from starting to relate to them primarily on the basis of a label which, in advance and from above, has been imposed on them by powerful others. Moreover, by adopting ‘vulnerability’ as its starting point, Out of Sight also once again risks diverting policy-makers – national but also probably more immediately local – from youth work’s primary focuses: the too-often untapped potential of the young people who engage and the opportunities it can offer for them to ‘go where they’ve never dreamed of going’.

As an ‘a-political organisation’ – a charity – often in search of government money, NYA clearly finds it difficult to open up these kinds of questions. The reality remains, however, that underpinning and shaping the vulnerabilities it lists are long-standing and deep-seated structural issues with seriously damaging effects, particularly on young people and the services available to them. These, moreover, are issues which over the last decade the government departments it is seeking to address have not only ignored – treated as irrelevant – but have exacerbated.

Above all, in a post-COVID era (whenever that might come and whatever it might look like), such ‘political’ issues will surely have to be made explicit if a youth work is to be advocated which both speaks and responds to the ‘new normal’. If they are not, with even fewer resources likely to be available, far from encouraging youth work as informal education, the overriding message policy-makers are likely to take from Out of Sight is: ‘target, target, target’.

Bernard Davies is a qualified youth worker whose practice experiences were in open youth work settings. He was for five years a youth officer in the Sheffield Youth Service, has taught on qualifying courses for youth workers, teachers and social workers and is now a member of the In Defence of Youth Work Steering Group. His publications include a three-volume history of the Youth Service in England and ‘Youth Work: A Manifesto for Our Times – Revisited’.